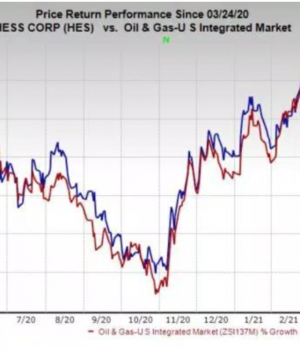 Hess Corporation HES recently said in the virtual Scotia Howard Weil Energy Conference that it expects multibillions of exploration potential to be still left in Guyana. While the company anticipates Guyana assets to boost growth, the Bakken assets will likely be the cash engine.

The company has made 18 world-class oil discoveries at the Stabroek Block, located off the coast of Guyana, with partners Exxon Mobil Corporation XOM and CNOOC Limited. It estimates gross resources of more than 9 billion barrels of oil equivalent from the promising discoveries. Notably, the Liza Phase 1 development at the site achieved its 120 thousand barrels of oil per day (MBbls/d) of nameplate capacity last December. It has a breakeven Brent price of $35 per barrel of oil.

The company expects its massive upstream portfolio to deliver a compound annual growth rate of around 33% in operating cash flow by 2023.

Hess’ shares have surged 94% in the past year compared with the industry’s 95.2% rise.