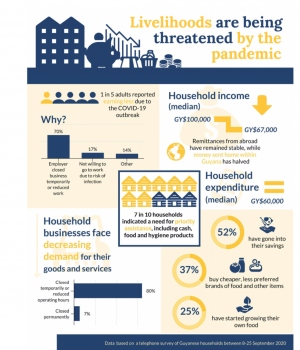 Results from a UNDP sponsored survey, requested by the Civil Defence Commission(CDC) indicate that the national median household income for Guyanese households was significantly reduced by December of 2020.

The Consultancy Group Inc (TCG) was employed on
a consultancy basis to design and execute the requisite survey and to provide a report on the analysis of the data collected.

Income and expenditure
At the aggregate level, median income decreased from G$100,000 to G$67,000 between January 2020 and the month prior to data collection. Such reduction in income were experienced in both households headed by females and other households, in each region without exception.

Household expenditure was stable for female headed
households but declined in other households. Approximately 8.2% of the households receive remittance. However, 12.6% of households headed exclusively by females and 6.7% of those with other headship arrangements receive remittance. Remittance is obtained mainly from the USA (74.2%) but Canada is also
an important source for especially households in regions 1, 2, and 3. At the aggregate level, remittance remained relatively stable during the COVID-19 pandemic with a median of G$20,000
for the month.

Approximately 4.91% of all households have members that work in other regions and who stay there for extended periods. Money sent home by such individuals had a median of G$60,000 in
January 2020 and this was cut in half by the month prior to data collection. This was due mainly to noticeable and sometimes substantial decreases in the amount sent home to each region
except regions 4 and 5.

The data used in the report were collected using a combination of telephone (mobile) and face-to-face interviews between 8 to 25 September 2020. The telephone numbers were determined using random digit dialling and were stratified by mobile service providers in the country.

A nationally representative sample of 1200 with proportional allocation to the geographic regions was employed for national level analysis and an augmented sample of 1500 with 300 oversampled units in hinterland regions for regionally disaggregated analysis wherein the regional samples are
regarded as independent. The response rate for the survey was 67.1%.

This report was sourced from the Socio-Economic Impact Assessment (SEIA) of the Coronavirus Disease 2019 (COVID-19) on Households in Guyana, as prepared by the UN Development Programme (UNDP).