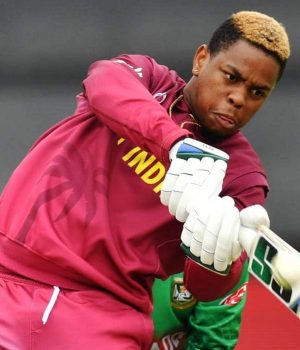 Shimron Odilon Hetmyer, born December 26, 1996, in Cumberland, East Canje Berbice, who some believe, is destined to become the next iconic West Indian cricketing warrior, was left out of the West Indian playing XI for the first test in New Zealand. The West Indies suffered an innings defeat.

Hetty, as he is fondly called, the soon to be 24 year old has scored five ODI centuries before the age of 22. For comparison, West Indian Great Brian Charles Lara had not scored a single ODI century by age 22. Hetty holds a special place in Guyanese and West Indian cricket lovers’ hearts worldwide for his indomitable brave spirit, commitment to winning, and pride in our identity as fearless, brave, and supremely confident competitors. His being left out of our New Zealand playing XI was a tremendous disappointment for many.

All who have witnessed Hetty’s destructive batting displays leave the arena in awe at his potential. He can, single-handedly, change the character of a contest. He is a powerful, fearless, and skillful striker of the ball. Whether batting without a cap, sporting a blonde or green hairdo, in a wide-brim cap, or with the helmet, he is a throwback to a different time, a different era, a present day reminder of quintessential West Indian batting.

Hetty has been marked for West Indian greatness since he struck his maiden ODI century in just his third match for the West Indies against the UAE in 2018.

His brilliant, match-winning 125 off 93 balls in the 2nd ODI vs. Bangladesh in Providence, Guyana, in 2018 made him the youngest Guyanese to score an ODI century for the West Indies.

His brutal 11 fours and seven sixes 106-ball 139, which powered the West Indies to the highest-ever successful run chase at Chepauk, Chennai in December 2019, was an innings of beauty, power, and majesty reminiscent of the West Indians of old. It left Virat Kohli and his Indian side stunned and reeling. That innings made clear the special nature of the talent of Shimron Odilon Hetmyer. Many believe that it was this performance that earned him a $1 million USD contract with the IPL and it cemented his reputation a match-winner. It also made clear that if the West Indies are to return to global cricketing prominence that Hetmyer is the indispensable man that West Indian cricket must find a way to keep in the side. He is the straw that will stir the West Indian sorrel.

Hetmyer has not missed a T20I since August 2018.  However, his performances to date have raised some doubts about his position’s security in the team. He averages 21.4 with a strike rate of 121.59. There is a constant drumbeat from his critics that his place is not yet locked in as the West Indian No. 3.

The West Indies cricketing brain-trust must move quickly to clarify and secure Hetmyer’s role and place in the T20I, ODI, and Test formats. The time is now to give him the peace of mind, the trust, and the responsibility to be the match-winning cricketing artist he is destined to be. Cricketing prodigies are born; they are not made in the nets.

Legendary West Indies batsman Viv Richards told ESPN Cricinfo: “Hetmyer we keep speaking about, he’s a young talent I believe when he settles down, his numbers could be much better for West Indies in the future, but at present, he’s a little if and but at times, but when he works that out and gets to believe he can accomplish that, he’ll be okay. But his talent, his talent is enormous, it’s just for him to know how to get that done.”

Asked about comparisons between him and Hetmyer, Former West Indies Captain Clive Lloyd said: “I think he has got exceptional talent. He’s got good eyes, he gets into position rather quickly, I just think he wants to score quickly and loses that sort of concentration. He needs to just apply himself a little bit more because he is a fantastic-looking player. Same thing [with Pooran] — I told him too that they are the two best players around.”

Michael Holding, on the Mason & Guest podcast, about Hetmyer said, “I see the light at the end of the tunnel because I see talent.” “It is a matter now if we can garner that talent, if we can produce the best of that talent, and then produce, of course, a good team. Because individual talent ain’t gonna go as far as a good team with a good team spirit and a good management structure around that team.”

Keith Semple, Saint Stanislaus and Guyanese cricketer who played for the West Indies in 1998-99, has noted that “Guyana has had a long list of players who have made Guyana proud on the international cricket scene but that many of our seemingly most talented Guyanese batters have, apparently, underachieved at the first-class level: Faoud Bacchus, Rabindranauth Seeram, Timur Mohammed, Leon Johnson, Narsingh Deonarine, Andrew Jackman, Nolan McKenzie and myself to name a few”. Semple believes that this speaks to nurturing and player development deficiencies in our Guyanese and West Indian cricketing infrastructure, which we must get right in the case of Hetymer.

We Guyanese know and revere this spirit that “Hetty” carries. It is the spirit personified by Shivnarine Chanderpaul, who, as Kurt Toolsie described, upon reaching his personal milestone in the successful and improbable West Indian 418 run chase against Australia in May 2003, at the Antigua Recreation Ground, knelt and kissed the earth in a silent pact with all West Indians that these lands and the dignity of those who dwelled in them would be defended.

Cumberland is the first village in the Canje Road, located just off Sheet Anchor and No 2, Canje. It is bordered by Canefield, and farther down are Rose Hall, Reliance, Betsy Ground, and Gangaram Settlement. These are communities with a long and rich histories. One finds Cumberland and Canefield listed in an 1860 listing of Plantations and Negro Villages of British Guiana. Many of the residents used to be employed at the Rose Hall Sugar Estate as cane-harvesters, laborers, or office staff. With the closure of the Sugar Estates, things are harder there now. Others are teachers at the Cumberland nursery, primary and secondary schools, and other nearby schools. Cumberland is also known for its Eidgah, an open air mosque where Muslims perform prayers for Eid. It is the only one of its kind in the Caribbean.

Shimron Odilon Hetmyer is a defender of these lands and the people who dwell in them.

The cricketing gods have blessed him with prodigious talents. His contributions were essential to the last West IndiesTest Series win in 2019 versus England in the Caribbean. Our cricketing leadership, coaches, captains, and selectors must recognize, appreciate, and nurture the unique gifts he brings to the arena. We must not be afraid to bet on his evident potential. History will judge us harshly if we squander his talent.

Hetty, too must realize that the West Indian cricketing gods give, but they are cruel and fickle and that the talent and opportunity they provide can be unceremoniously taken away. He must begin to better appreciate the incredible privilege of wearing the maroon West Indian cap and commit himself to make the personal sacrifices those gifts and the privilege demand.

Dr. Terrence Richard Blackman is a member of the Guyanese diaspora, an associate professor of mathematics, and a founding member of the Undergraduate Program in Mathematics at Medgar Evers College and a Member of The School of Mathematics at The Institute for Advanced Study. He previously served as dean of the School of Science Health and Technology at Medgar Evers College, where he has worked for more than twenty-five years. He’s a graduate of Queen’s College, Guyana, Brooklyn College, CUNY, and the City University of New York Graduate School. At Queens College, Dr. Blackman was a member of Nobbs House. He was the Captain of the Queen’s College Debate Team, the Basketball Team and the Indoor Hockey team. He counts as his highest schoolboy honor simultaneously opening the batting for both the Queen’s College Junior (Under 16) and Senior (Under 19) cricket teams in his last year at school.