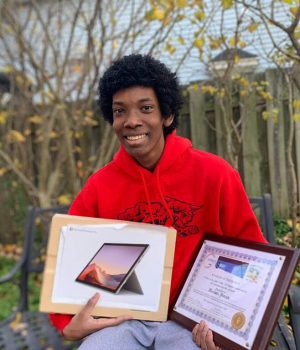 (Republished from caribbeanlifenews.com)
by Tangerine Clarke

“I hadn’t really won anything on that scale before so the feeling was pretty overwhelming at first,” said the young man who migrated to the United States just two years ago, and is excelling in his course of study.

Just recently presented with his prizes, due to the on going coronavirus pandemic, Prass will enjoy a round-trip ticket for two to his homeland. He also won a Microsoft SurfacePro Laptop 120GB 13-inch display Laptop, compliments of Simplicity IT, and a plaque, from non-profit, Guyanese In The Diaspora, (GID) in conjunction with the Guyana Consulate New York, and former Consul General, Barbara Atherly.

The young man, who lives in Rochester, New York with his family, credits his mother, Pauline, for inspiring him to enter the contest that invited students between the ages of 14 to 18 years old to enter the competition, that asked “What can Guyana at 50 do, to catapult its advancement on the world stage?”

Wise beyond his years, Prass, a former student of the New Guyana School, and prestigious Queens College High, (QC), said he first brainstormed ideas on “what I’d want to make a video on.”

“I went into the challenge thinking that I would do something different from the other contestants, an area that isn’t that well explored in Guyana,” he added.

“When people talk about careers in Guyana and what they would like to pursue, you normally hear stuff like medicine or being a lawyer — which is fine, but there are not too many people looking for careers in the arts, despite the vast amount of potential for it,” expressed Prass.

Speaking like a true professional, Prass, at first was not too confident of winning, but he wanted to ‘pitch my idea out there anyway.” His video, “We Are Art and the Development of Guyana’s Future” won the Gold Medal prize.

He further explained that the video making process was the hardest part, but he ultimately birthed the idea that followed up with a script. “It was simple, except for shooting of the scenes, the editing and gathering of the footage to compliment the audio, that was challenging.”

“I had to scour the Internet for various artists, musicians, performers. Luckily, since my sister followed a lot of Guyanese artists, and my brother Taylor North is a YouTube rapper, the process was much easier,” he said.

Before entering the Video Challenge, the young man was doing what most students like him do, completing homework assignments, or playing Super Smash Brothers on Nintendo Switch, video games.

According to him, he didn’t do any research before entering the completion. “I’ve made a few videos that utilized somewhat standard editing, and the video shooting process wasn’t too hard either. I had the idea of making “memes” to practice video editing so it wouldn’t be too hard to implement transitions,” he shared.

The talented youth is confident that his idea was unique. “Not many people really focus on entertainment or the arts in Guyana. I’m also fairly certain that I’m one of the few people in my grade that was interested in playing video games at a high level, which was my initial idea but eventually I settled for entertainment and the arts in general,” he said.

Prass wants to inspire his peers to put their best foot forward when entering any sort of competition. “Even if you think that you won’t do well, it’s always a good learning experience and it’ll help you to pursue other things in the future. If there’s anything that you would like to do, anything that you want to strive for or go for it despite how abstract or different that it may be, don’t let anyone stop you from pursuing it. In this day and age, perseverance in any field will be rewarded.”

Missing his favorite treats, he said. “Ever since I’ve left Guyana I’ve been craving cashew fruits and pickled mango. I also miss having a Royal Castle being conveniently close to my house. Aside from food, my main memories stem from QC and having friends that I could talk to and socialize with on the regular.”

Delicious Guyanese delights, aside, since arriving in the United States, Prass has won several video game tournaments, defeating the best player in his region.

“Before then, I’ve mainly been proud about my academic achievements in Guyana like attaining a high grade in common entrance, to attend QC, and doing generally well in class here in the United States.”

With determination, focus, and a grounded attitude Prass, who asserts that it takes dedication and practice to get good at any sort of craft, encourages youth, not to get frustrated “if you feel as if you’re initially bad at anything. I’ve been playing video games professionally for about six years and also been doing video editing for several months or so, he inspired.

WANTED: 4 Escapees From Mazaruni Prison On The Run…