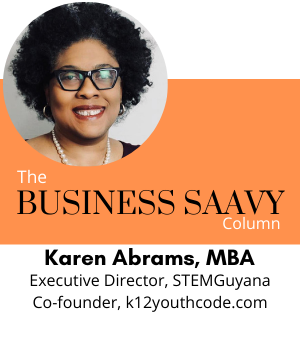 by Karen Abrams
Guyana stands on the cusp of major economic development, but cusp is not achievement and even if some of the projected oil funds are gained in the short-term, the nation still risks a pervasive anger among citizens, growing division and civil strife, all factors which will negatively impact the peace and stability necessary for the risk taking and investment necessary to ensure the development of Guyana.

Many citizens in the diaspora, like me, have for years, contributed in one way or another to peace, stability and the educational empowerment of citizens, hoping to help build a platform upon which the nation’s leaders could stand to guide our citizens to economic development and improved living conditions.

The evidence of Guyanese potential is everywhere. The energy, enthusiasm, and achievement of our people both home and in the diaspora are on display for the world to see.  Guyana is on the cusp of greatness, the question remains whether we will rise to the occasion or sabotage ourselves.

Today, the future we all crave is in jeopardy.  A significant group of Guyanese are watching daily events unfold, the consequence of which are frightening.  Actions taken today by some of our public and private sector leaders can lead to instability and resentment and worst case outright civil war among the citizens of Guyana, and right at a time when our great nation has the most to lose.  To clarify, there are no winners in civil destruction.  We should embrace the peace and relative tranquility we have today.

The government of Guyana is operating in a new world, and facing possibilities and challenges never before experienced by any other government of Guyana, so the bitter and divisive politics as usual is not a recommended strategy.  This government will need the support and cooperation of all of the citizens of Guyana if it is to be successful. Trillions of potential dollars are now at stake, and to an outsider-insider like myself, it defies logic that any person or group of Guyanese would opt to embrace a strategy of revenge politics at this juncture.  There is simply too much at stake.

Over many years my husband and I, have committed extensively to making a contribution to the development of Guyana.  Our contributions go back more than thirty years.  We knew our commitment would require sacrifice, both in time and money, but it was a commitment which was necessary.  We are also aware that the innovation necessary for Guyana to move forward had to be done quickly and therefore the private sector, the diaspora and civil society had to be involved, but the innovation also had to be managed by people who loved Guyana and who would be able to ‘press on’, whatever the challenge.  Once we committed however, we couldn’t stop but today we are fearful about the future.

Guyana, with her rich diversity in flora, fauna and her people is a small enough nation, a nimble enough nation, to make the changes necessary to be a model of success to the world.  Our leaders must embrace a big vision of conciliation, of unity, of inclusion, of merit and from all quarters, our leaders must rise to the challenges of development and inspire all citizens, regardless of ethnicity, to contribute to the progress of our great nation.

The anger, real or perceived, from a five month political conflict is perplexing.  Is this not the nature of politics?  The Coalition government used the courts, just like the then opposition used the courts.  The world spoke, local influencers spoke, powerful countries became involved and it took five months.  That’s the nature of politics. The idea that one group of people should be publicly flogged, demeaned, and made a public lesson harkens back to the brutal aftermath of slave rebellions and there is no place in modern day Guyana for that sort of thinking.

The nation needs to heal.  Our people need to be united.  We all need to be working diligently to prepare for development and that requires that our leaders engage us with a big vision and inspire us all to contribute meaningfully and equally to the vision.

Today we stand on the cusp of greatness, but slippery slopes are all around us.  Whether we progress or regress depends on the actions of our leaders on all sides of the political divide.  They should be talking and compromising and making deals that say to the world, “the people of Guyana are able to solve their conflicts, the nation will not devolve into massive civil strife, so feel free to come in and invest with us, your investments will be safe.”