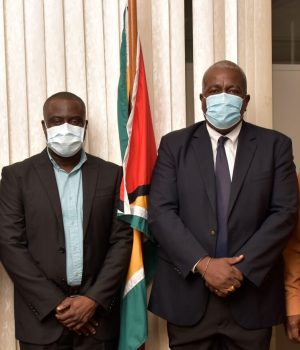 The electronic transformation of the health, education and public service sectors are among the components of the Project. Permanent Secretary within the Office of the Prime Minister, Mr. Derrick Cummings also attended the meeting.

The project was designed to upgrade the national broadband Network to enable equitable delivery of services to citizens in the areas of education, health, security, government administration, business, citizenship and immigration.

To date, the improved broadband network provides internet access to 53 government ministries and agencies; to more than 95 secondary schools; the 2 campuses of the University of Guyana and the Cyril Potter College of Education; to over 37 technical/vocational institutes including the Carnegie School of Home Economics; to the offices of Regional Education Officers, and to several NGO’s.

In 2017, the project was funded through a $4.696B loan from the China EXIM Bank and the contract was awarded to Huawei Technologies of China.

There has been no confirmation on whether the United States, Department of Justice indictment of Huawei for allegedly stealing U.S. technology, conspiracy, wire fraud, bank fraud, racketeering, and helping Iran to evade sanctions, amongst other charges, will affect Guyana’s current relationship with the global powerhouse.

The success of the broadband project is important to Guyana’s global competitiveness and development of both its human and natural resources.  The PPPC government has also promised thousands of online academic scholarships which will require a robust and reliable internet network be made available to the citizens of Guyana.

The meeting was held in the conference room of the Office of the Prime Minister, Colgrain House, Camp Street, Georgetown.