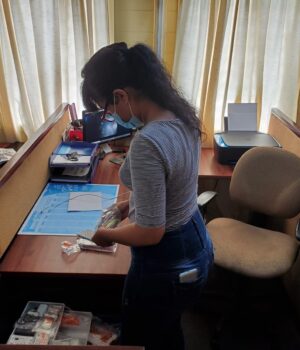 The Government of Guyana, through the Office of the Prime Minister (OPM), has begun the installation process of 1000 free internet access hubs across five regions. This development expands the network of more than 200 internet hubs across the country for which the Telecommunications Ministry under the previous coalition government had built.

Dubbed ‘The 1000 Hubs Project’, the initiative, which is a collaborative effort between the Industry and Innovation Unit at OPM and the National Data Management Authority (NDMA), will result in thousands of persons benefitting from free Wi-Fi.

The hubs will be outfitted with the 1000 internet boxes (LTE/WiFi CPE) presented to the Government by Chinese multinational technology corporation, Huawei, in November last year.

More internet hub sites in rural and interior communities and in vulnerable coastal communities means that more children will be able to access online learning resources, more adults will be able to research solutions to problems affecting their communities, more civil society programs designed for community members will be offered and generally speaking, the digital divide in Guyana is expected to be significantly reduced.

Residents of Region Six were the first to benefit from the initiative, through the installation of the Wi-Fi devices at the Bush Lot Secondary School and four Neighbourhood Democratic Council (NDC) buildings (Canefield/Enterprise NDC, Good Hope/No. 51 NDC, Port Mourant/Johns NDC and the Adelphi NDC).  Other public buildings in the region assigned for free internet access include Manchester Training College, Kilcoy/Hampshire NDC and the Williamsburg Health Centre.

Work in Region Two is scheduled to commence in March with the installation of 18 hubs to add to the existing 32 internet access locations there.  The entire project should be completed before the end of the year.

The hubs are geared to complement the current installation of ICT hubs in approximately 200 communities through the ICT Access and eServices for Hinterland, Poor and Remote Communities Project.  At last month’s budget, it was announced that $1.3b will be allocated to support the rapid development of the ICT sector this year.