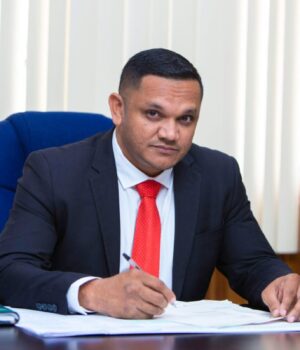 by Mikaila Prince
As Guyana records a 14.5 per cent growth rate in real Gross Domestic Product (GDP) in the first six months of 2021, the country’s Minister of Natural Resources, Vickram Bharrat, MP shared that this advancement is fruit of the country’s oil and gas sector.

The minister was at the time being interviewed on the National Communications Network, where he discussed the findings of the country’s financial mid-year report. The widely-talked about report highlights the performance of Guyana’s economy, which grew in real terms by 14.5 per cent, while the non-oil GDP grew by 4.8 per cent during the first six months of 2021.

Notably, Minister Bharrat was quick to point out that despite the current health crisis imposed by the Covid-19 pandemic and the effects of the recent unprecedented nationwide flooding, the recorded growth in the economy is “commendable”.

As it relates to the gold mining sector, the natural resources minister said the industry remains a significant contributor to Guyana’s economy. Notwithstanding the effects of the nationwide flooding, he said the mining sector continues to see increased operational activities – especially with the incentives the government implemented to put money back into the pockets of Guyanese.

The wide-ranging inducements which were part of the September 2020 budget, saw the removal of value-added tax (VAT) in mining and logging equipment and machinery, and tax concessions on all-terrain vehicles (ATV).

Further, the minister reported increased activity in the forestry sector, which has also contributed to the growth of the economy.

“When we took over forestry, the sector was almost bankrupt. We started to rebuild and prudently manage the sector in terms of providing incentives to the stakeholders, changes in the logging export policy, enabling more exportation of lesser used timber. We have seen an increase in exportation and revenue.”

To ensure further economic growth in the forestry sector, Minister Bharrat called on concessionaires to invest and expand in value – added products. This, he said, creates more employment for Guyanese and increases revenue flow for Guyana.

“It is a win-win situation where the investor or concessionaire benefits, the Guyana Forestry Commission benefits and where the country benefits through revenue, through taxation and the generation of employment.”

Turning his attention to the non-oil economy which grew by 4.8 per cent, Minister Bharrat said this growth is especially important in the context of the pandemic and the floods. He linked it to the slew of initiatives the government has put in place to support and keep citizens afloat in these unparalleled times. The measures have put billions of dollars into the pockets of Guyanese.

“I see 14.5 per cent easily moving up. I see revenue from the oil and gas sector maybe doubling or tripling in 2022 from the direct sale of crude from Liza Destiny and when you add in the larger FPSO which will be producing 220,000 barrels of oil per day, that will probably give us ten to eleven oil lifts per year.” The natural resources minister noted that these massive funds will be used to build the non-oil economy in traditional sectors like agriculture, mining, tourism, forestry, bauxite and others.