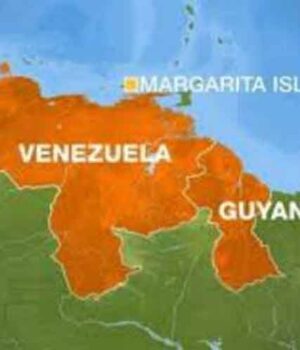 During talks in Mexico mediated by Norway, Maduro and Guaidó agreed that the oil-rich Essequibo region that Guyana claims as its own belongs to Venezuela and rejected the International Court of Justice’s role in settling a border dispute over the region. The two went as far as making their position known in the long-running territorial dispute by inking it in a Sept. 6 accord.

“You know that is most unfortunate that you would have an agreement between the government of Venezuela and the opposition that will include this dispute that Venezuela has with Guyana,” Guyanese Prime Minister Mark Phillips told the Miami Herald on Friday. “I say Venezuela has with Guyana because as far as we’re concerned, the Treaty of Washington of 1899 settled the border dispute between Guyana and Venezuela.”

The treaty refers to when an arbitration court, pressured by the United States, decided where British Guyana ended and Venezuela began.

They spent the week making the rounds in South Florida at the invitation of the South Florida-based Guyanese American Chamber of Commerce under the theme “Doing Business with Guyana.” Among their focus, meeting with members of the Guyanese diaspora to discuss investment opportunities and the transformation of South America’s only English-speaking nation thanks to recent discoveries of oil and gas.

On Thursday, ExxonMobil announced a massive new discovery of oil deposits in offshore Guyana and increased its estimate of the discovered recoverable resource to approximately 10 billion oil-equivalent barrels.

The find adds to previous recoverable resource estimates which since 2015 have added millions of dollars to the Guyanese economy, as well as jobs.

But the oil discovery also revived the border dispute that was supposedly settled in 1899. Located west of the Essequibo River, the disputed region consists of 61,600 square miles. After the matter failed to be settled at the level of the United Nations, it was transferred over to the International Court of Justice, much to Venezuela’s dismay. Venezuela wanted to continue with the U.N. arbitration.

In 2015, Venezuela issued an order that laid claim not only to the disputed region but to the exclusive economic zones of Colombia and nine Caribbean territories. The decree reasserted Venezuela’s sovereignty over Essequibo and its hundreds of millions of barrels of oil reserves.

In January, Maduro issued another presidential decree, this one establishing a new so-called “Atlantic facade” reasserting his nation’s claim to parts of Guyana’s maritime waters.

Phillips said Guyana remains confident that the International Court of Justice will rule in its favor.

“Guyana has maintained its respect for that process and we have continued to support that process,” he said. “We believe that international law will finally be the mode to settle the controversy between Guyana and Venezuela.”

Phillips said there is no telling when the International Court of Justice will issue its ruling on the matter. But it has submitted all of its arguments and reports to the court and it is now for the court to go through its process and determine when they will rule.

Phillips said once the decision comes, Venezuela “will have to accept” it. He refuses to entertain the idea that the court could rule in favor of Venezuela.

“I’m very confident that the court is unlikely to rule against us, so I won’t even entertain the thought,” Phillips said.

For now, however, the turf war and the latest declaration by Venezuela’s government and political opposition are having an impact.

“The practical impact of not having a settled border is it will affect development, it will affect business in Guyana because many investors may not want to come and invest in an area that they consider to be in dispute,” Phillips said. “The whole of the Essequibo area is an area that is rich in oil, extracted minerals, diamonds, you just name it … It is in our interests that this controversy is finally settled so that oil investors feel comfortable that they are coming to invest in a country and this country has jurisdiction over all of its geographic space.”