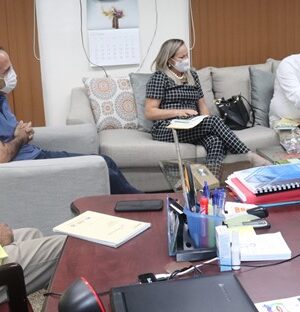 During the meeting, the two officials discussed collaborations between the two countries to further develop agriculture and trade.

The Secretary of State, who has been involved in developing agri-business in the state of Roraima for the last 20 years, said there was an interest by a number of agriculture businesses to develop demonstration plots in the Savannahs close the Roraima. These plots, he said, would be used to plant corn, soya beans, and peas.

He also said through collaborations between the two states, cattle production in the Rupununi can be developed into a massive industry for Guyana which will, in turn, improve Guyana’s export figures.

“We see the Rupununi as a great area for developing the cattle industry, which can then be exported to Roraima and then processed in one of the big abattoirs there. Once the farmers there are able to meet the demand, they would be able to supply the Roraima market. Our agriculture Gross Domestic Product (GDP) was 1.2 percent of the state’s GDP. It has since moved to 6.8 percent in two and a half years and I believe you can do the same. If we work together and continue to foster strong partnerships, we can increase our international export figures,” Mr. da Silva said.

Mr. da Silva noted that Guyana is also working to develop its corn and soya bean industry and once the infrastructure is developed, it will soon be able to satisfy the local market.

“While the production now is small, soon it will be enough to supply to the local market, but jointly, when the infrastructure is developed, it will be used by persons growing corn and soya bean here and eventually in Roraima. I also recommend looking into doing value-added, which is what Brazil is doing now. The soya meal can be added to the feed and then, what is exported, is the animal proteins such as beef, chicken, and pork,” Mr. da Silva said.

Noting that Guyana has longstanding relations with Brazil, Minister Mustapha said collaborations to develop the country’s agriculture sector are welcomed.

“We look forward to working with Brazil to develop our agriculture sector. Brazil is a trade partner around the world and exports to a number of countries. Through collaborations with Brazil, Guyana would be able to develop several of our agriculture subsectors like the cattle industry, and also the non-traditional crops that we’ve started like corn and soya bean.

“We have a trial plot currently under cultivation by a group of mostly local investors from the private sector that brought seeds from Brazil. The government is looking to expand on that industry to be able to provide the proteins for the poultry industry from that area. The government has budgeted $500 million to develop the infrastructure in the area,” Minister Mustapha said.

Furthermore, the minister said the government was moving ahead with the development of the deep-water harbour in Berbice and that persons from Roraima would be able to utilise this facility to export their produce, rather than having to travel up to the coast of Brazil to do so.

Minister Mustapha also noted that because Guyana is once again playing the lead role in CARICOM for agriculture, production has to be expanded in order to reduce CARICOM’s food import bill and advance the agri-food agenda.

“Our President is the lead spokesperson for agriculture in CARICOM. He has proposed to CARICOM how to advance the agri-food agenda, how to reduce imports into CARICOM from outside of the region, more specifically agricultural products. That means we have to embark of producing on a larger scale and Guyana is now poised to be one of the most important countries in CARICOM to move the agri-food system forward,” Minister Mustapha said.

The Secretary of State was accompanied by the President of NF Agriculture Inc. Mr. Yucatan Reis and Ms. Ilaine Heinz