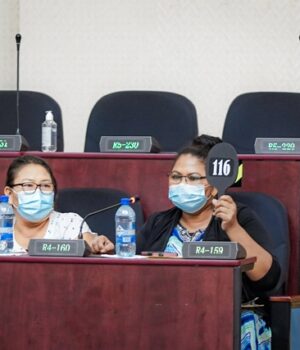 A number of miners on Saturday, participated in an auction hosted by the Ministry of Natural Resources and the Guyana Geology and Mines Commission (GGMC) for medium- scale mining properties.

Speaking at the opening of the activity, Minister of Natural Resources, Vickram Bharrat, MP, said the event is a fulfillment of a promise made by the PPP/C government to make more mining lands available.

The activity also adds to the many initiatives being implemented to encourage mining at all scales- small, medium and large, Minister Bharrat added.

As part of a collaborative effort to develop the sector, the GGMC and the Guyana Gold and Diamond Miners Association (GGDMA) procured an equipment that will help to minimise carbon emission and reduce the use of mercury in mining.

Minister Bharrat explained that not only is that equipment mercury free, but it will also increase mining recovery rate by over 100 percent.

This was the first auction held in four years. GGMC Commissioner, Newell Dennison, said the auctions are as a result of years of work by GGMC to make lands available to promote the development of mining in Guyana.

He said the intention is to give recognition and to create an avenue for the different miners to have access to lands to do more exploration and ultimately convert some of the properties to productive endeavours.

This, Dennison added, will see an expansion of revenues, not only to GGMC, but to the state as well.