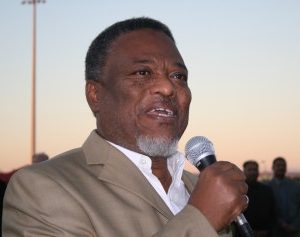 Former Prime Minister Sam Hinds, yesterday paid a courtesy visit to the Office Of The Prime Minister on Camp Street. Former PM Hinds has been selected for the position of Guyana Ambassador to the United States.

Prime Minister Phillips congratulated Mr Hinds on his position, during their discussions. He later said that the former Prime Minister has a wealth of knowledge and experience which is a major asset going into his new role.

“Samuel Hinds is the man for the job….I know that coming from his years of experience and knowledge of governance in Guyana, he is well-positioned to guide Guyana’s interaction with the United States of America”.

The sitting Prime Minister underscored the need to have someone with such experience in the position, since the United States is a major development partner.

“As you know the United States of America is one of the main development partners for Guyana, especially at a time now where we have a new investment from Exxon in Guyana, and other forms of investment coming to Guyana as a result of the country now becoming an oil and gas producing state.”

Former Prime Minister Hinds, said that his meeting with the sitting Prime Minister isn’t an isolated occurrence. He said that over the coming weeks he will be meeting with several Ministers of the Government to get a better understanding of the Administration’s agenda, so that he can efficiently function in his role.

“I’ll be meeting with other Ministers over the next two weeks, to establish contacts and to learn of what interests they might have in my job coming up”.

Mr Hinds said that upon assuming office, among his priorities will be to build a stronger relationship with the Guyanese Diaspora in the USA.