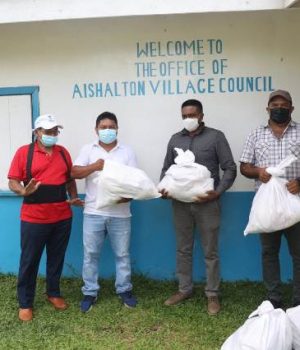 On Wednesday 350 hampers were handed over by Minister of Local Government and Regional Development, Hon.  Nigel Dharamlall, to Toshao of Aishalton, Mr. Michael Thomas for residents who are currently under COVID-19 lockdown.

“we expected that during the course of the next few weeks that these hampers are going to be of a humanitarian nature to help these families during this period.

It is very difficult living in this part of the country far away from coastal services. So today is part of the continued effort of our Government in this fight against COVID-19,” Minister Dharamlall said.

66 households in Aishalton have been quarantined with 33 Covid-positive cases.  As such, health teams in the community are not only checking daily on those persons, but they are also inoculating others who request the vaccine.

Minister Dharamlall further stated, “I seriously would like to encourage the residents of Region Nine that they should take the vaccine as it is one of the safest ways to fight against Covid in addition to masking, sanitising and social distancing.”

Minister Dharamlall also said he was hopeful that these combined efforts would soon bring the disease under control in the village.

Aside from this, the second tranche of the distribution of the Government’s $25,000 per household COVID-19 relief cash grant continues in the Region. An additional 278 households are benefitting from the distribution, which is currently ongoing near North Rupununi.

Meanwhile, Toshao Thomas thanked the Minister for the hampers.

“This will help us tremendously since over a week now, we have put the families on quarantine so they are not allowed to leave their respective compound. It is a great relief for us, as the Village Council since we have been struggling for the past week.

We have been trying in various ways to meet the needs of those on quarantine, especially those infected,” he said.

Since the village’s first confirmed Covid cases, Toshao Thomas said the Village Council conducted contact tracing to contain transmission of the disease, and other precautions were taken to ensure public safety.  To this end, he said Aishalton will implement a full lockdown on April 23 and would also facilitate emergency visits.

“Our mobile team will be here in Deep South, one in South-Central and one in the South Pakaraimas as well in North because we want to cover this Region within a week and a half to get as much as a 90 per cent coverage, but we still need to sensitise people about the vaccine due to the negative things being circulated about it,” he said.